Hi friends! Now I know that most of you in North America are currently only thinking about the Superbowl on Sunday… however, I’m way more excited for the Winter Olympics starting February 9th! 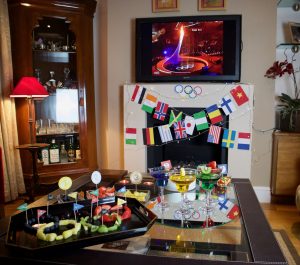 To be honest, I’ve always been a fan of the Olympics. In 2012, when the Games were in London, I  worked for the French delegation and it was so. much. fun. I love the frenzy around it, I love that you get to see so many sports that are not usually on TV, I love that its a worldwide event… there are so many things that I love about it. For the Winter Olympics, I’m mostly looking forward to watching figure skating (my FAVOURITE!), alpine skiing (all kinds of competition, I love it all) and ice hockey (because yes, I studied for 4 years in Montreal, Canada so hey, I got hooked on hockey! Watch it, its honestly a really cool sport). What are your favourite winter sports to watch? 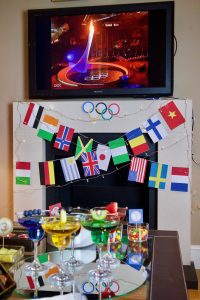 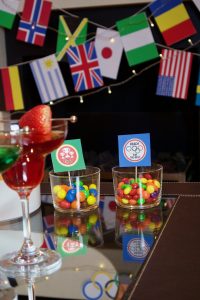 I went on a little of a tangent there, but I guess it shows how passionate I am. Haha. Anyway, of course I had to combine both of my passions into one and that gives you… an Olympic Games Party! How fun! Invite a few friends over next Friday night to watch the Opening Ceremony – its also a great excuse to get together. 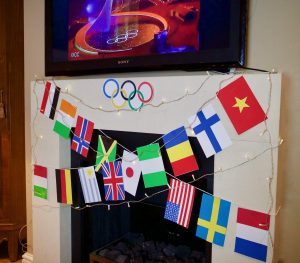 To be completely honest, at first I was really thinking “ok, what in the world could I prepare that’s a little festive, quite original, not too complicated and affordable?”. So of course, I turned to Pinterest and I was so disappointed. There was pretty much nothing. In hindsight, I’m so glad I didn’t find anything because after a few brainstorming sessions, I came up with a couple of good ideas I really got excited about. And it all turned out so well. I couldn’t be happier. 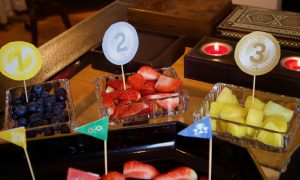 First, I printed out a few printables from HERE so I would have at least something to start off with. But if you know me, you know that I would never stop there. 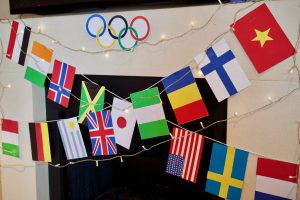 So I came up with a few other ideas… including this flag garland! I know I could have just printed the flags off the Internet but what’s the fun in that? I’ve said it before and I’ll say it again, for me, arts & crafts is such a soothing activity. I love spending hours drawing, measuring, cutting, glueing… its my jam. That being said, its so easy you can totally turn this into a fun weekend activity with your kids (I posted a few behind the scenes video on my Instagram if you want to see how I made them!). 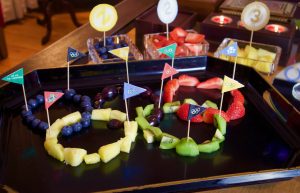 Now for the food, I really wanted to create something in the shape of the Olympic rings but had to find 5 different things that are red, green, blue, yellow and black. And you know that there aren’t that many blue foods… I even Googled “blue food” hahaha. So anyway, I came up with the idea of doing a “create-your-own fruit skewer” dish and of course used blueberries for the blue ring and dark grapes (the darkest I could find) for the black ring. For the other colours, there are a lot of options so pick your favourites. 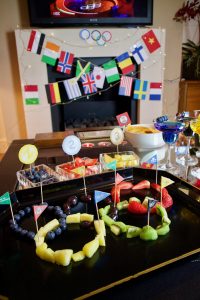 I got some sticks and glued the little flags I printed and started creating my rings. Pineapple for the yellow, strawberries for the red and kiwis for the green ring. So simple. Done and dusted in 10 minutes. 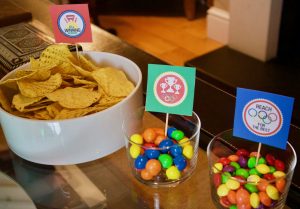 I also walked by the junk food aisle as I call it and picked up M&M’s and Skittles because I thought they would go so well in the theme. And I grabbed some tortillas as well, because, who doesn’t like tortilla chips at a party?! 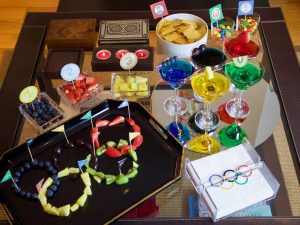 Now for the funnest part: the cocktails!! You might remember my bright orange cocktails from this Halloween blog post. Well, the idea is pretty similar! I bought different colours of food colouring (for the black, I mixed some blue, red and green… looks so yummy…not!! haha) and added them to my cocktail, in this case it was gin & tonic. But you can also make them with mojitos or any other translucent cocktails… or non alcoholic drinks for that matter like Sprite/lemonade or even just water! 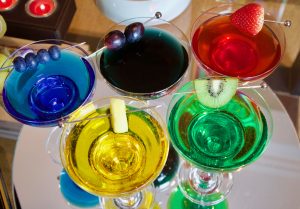 I bought my glasses here and the cocktail sticks here. I also grabbed my round mirror as a tray that I had also used in this blog post. A mirror like this is so multipurpose and looks good with literally anything, its a great investment. I found similar ones here and here, if you’re interested. 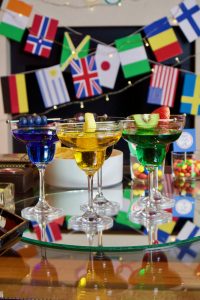 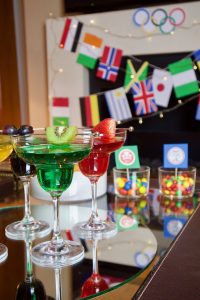 See how bright and colourful these glasses are!? So pretty, especially with the fruit skewers as a little decoration. 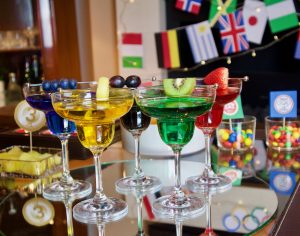 As other little details, I had a couple of candles as well as these white napkins on which I literally glued the Olympic rings, printed off the Internet. I looked for Olympic napkins online but didn’t find anything. So I just DIY-ed it. Anything is possible, I tell you! 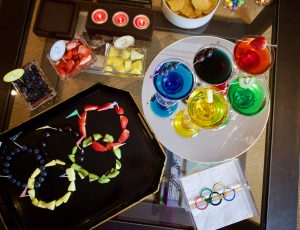 I hope I got you in the mood for the Olympics starting next week!! 😉  Have a fabulous week, friends! And happy Superbowl Sunday, if you’ll be watching!

I’ll be back next week for a full on week of Valentine’s Day ideas! So excited! <3 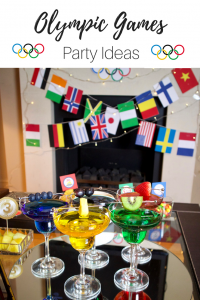 2 Replies to “Bring on the Olympics!” 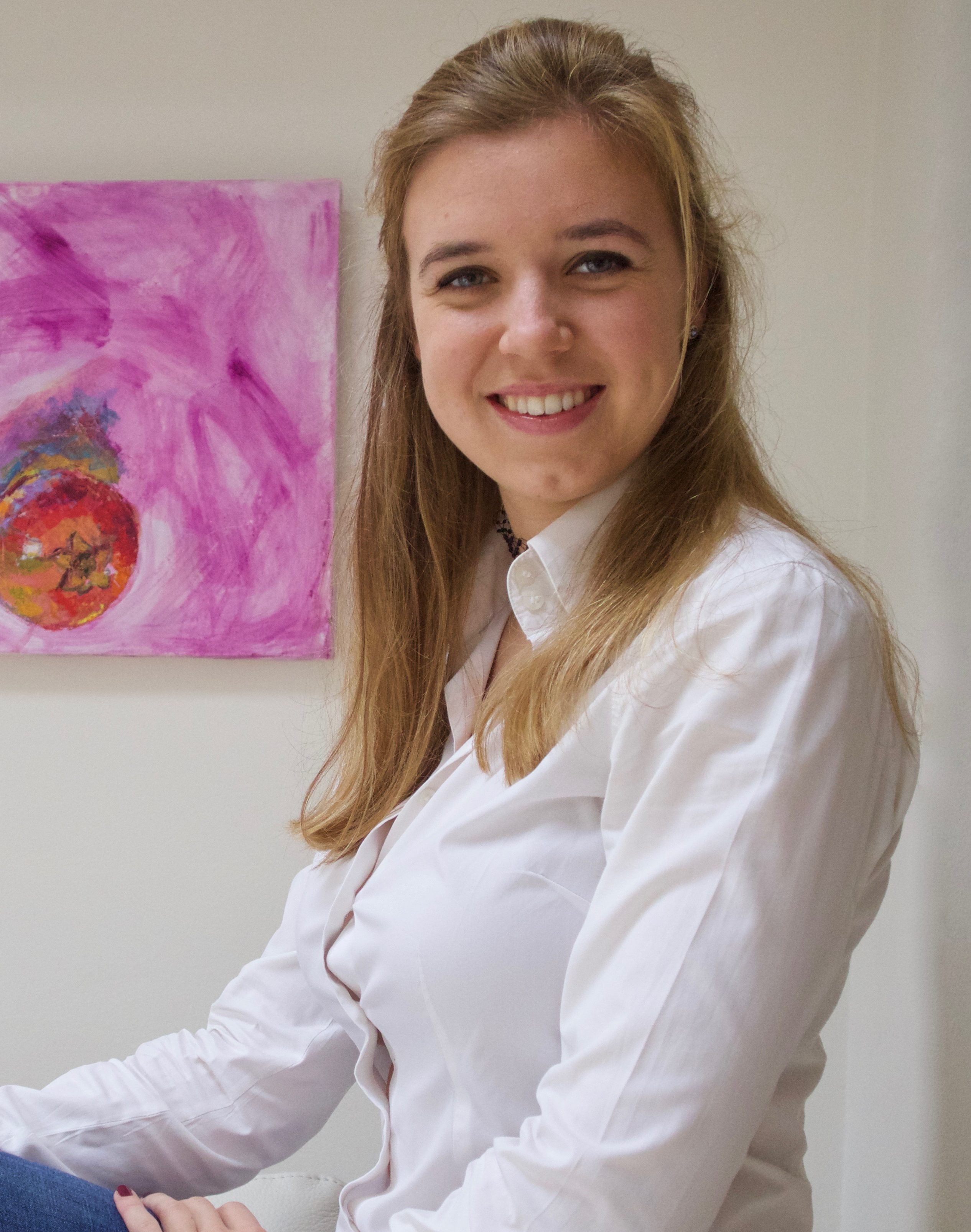